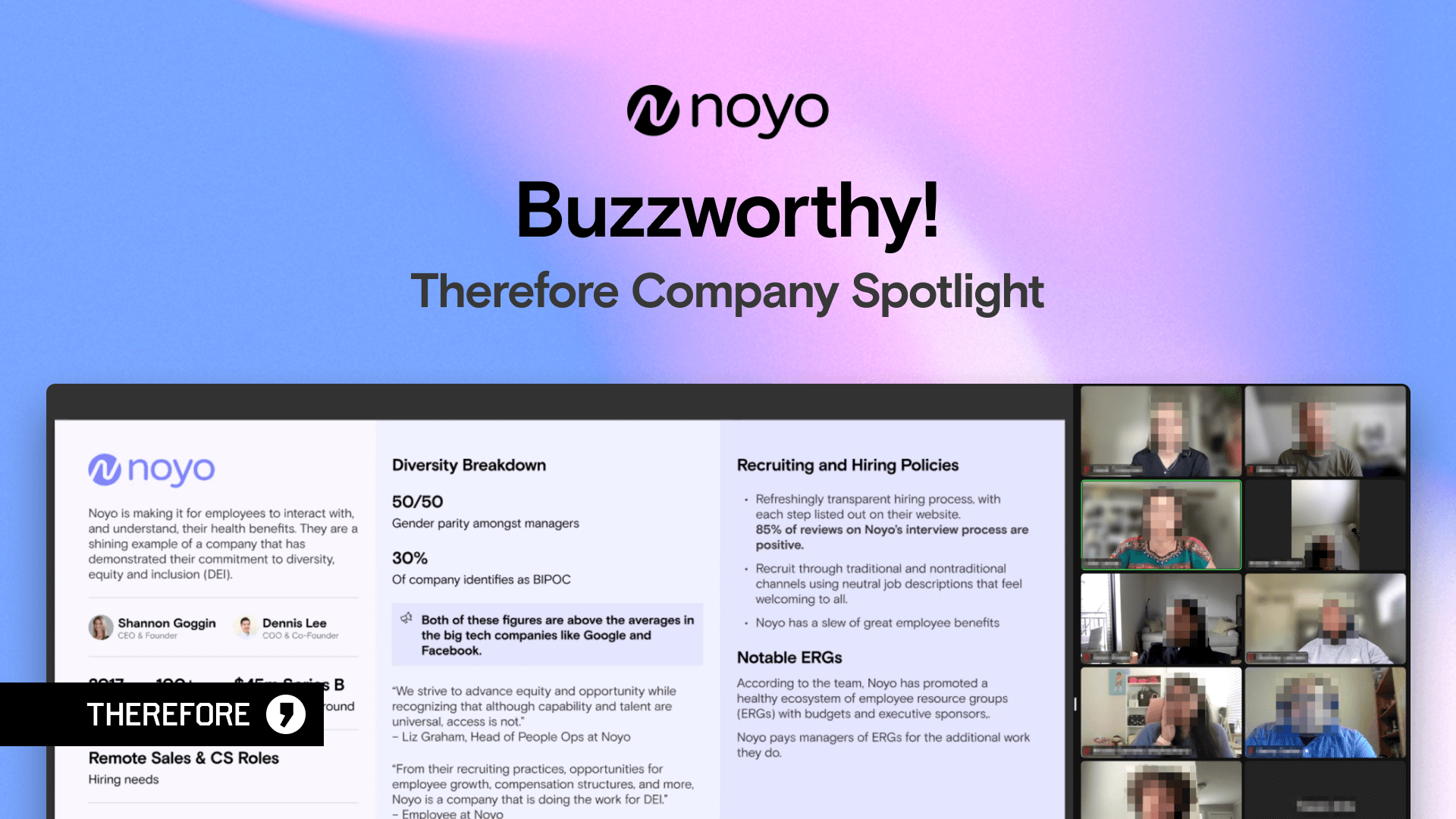 Noyo was founded in 2017 by Shannon Goggin (CEO and Co-founder) and Dennis Lee (COO and Co-founder) and has grown to a team of over 100, making it easier for employees to interact with — and understand — their health benefits. In May 2022, the team raised a $45 million Series B round and are expanding further with many open remote roles.

They have a powerful company statement on diversity that acknowledges the work required: “representation at all levels doesn’t happen by chance. It takes accountability, intentionality, and adaptability.” And unlike many other companies, Noyo hasn’t stopped at acknowledgement: here’s how this rising tech company is demonstrating their commitment to diversity.

Collecting the demographic data of your team is the necessary first step towards creating an actionable DEI strategy. The next step is publishing that breakdown for external accountability. According to the website, as of Fall 2021, the company has reached gender parity at the manager level with 50% male and 50% female managers. Last year, the company reported that 30% of the company as a whole identifies as an underrepresented population (BIPOC). Both of these figures are far above the averages in the big tech companies like Google and Facebook.

“We strive to advance equity and opportunity while recognizing that although capability and talent are universal, access is not.”  – Liz Graham, Head of People Ops at Noyo

According to the Noyo team, the company has promoted a healthy ecosystem of employee resource groups (ERGs). A few examples are Moyos (Muslims at Noyo) and the Women in Tech group. What stands out most is that Noyo pays managers of ERGs for the additional work they do and provides a budget for every ERG to pursue their goals with the support of an executive sponsor.

The hiring process at Noyo is refreshingly transparent with each step listed out on their website. They claim to post job openings via traditional and nontraditional channels and have taken the time to craft neutral job descriptions that feel welcoming to all. 85% of reviews on Noyo’s interview process are positive, and 75% of Glassdoor reviews are five stars.

Finally, other initiatives include #GrowAtNoyo to bring in speakers on particular subjects related to diversity, e.g. Accessible Design, Gender & Gender Identity, Interview Training, and Addressing the Impact of Racism on Health. And one employee highlights a favorite Noyo tradition called Getting to Noyo Coworkers: “Twice per month, one person from the team presents a topic of their choice that helps others get to know them better. The only rule is that the topic cannot be work-related.”

From their recruiting practices, opportunities for employee growth, compensation structures, and more, Noyo is a company that appears to be doing the work for DEI. We were excited to highlight Noyo in our first webinar for the Therefore Community!

A community accelerating access for Black and Latinx talent.
Product
As a Job Seeker
As a Company
Contact Us
Company
Home
About Us
Blog
© 2022 Therefore, Inc. All rights reserved
PrivacyTerms Of Service